OK, so I go to request a Q be closed, reason being it would be better answered elsewhere. 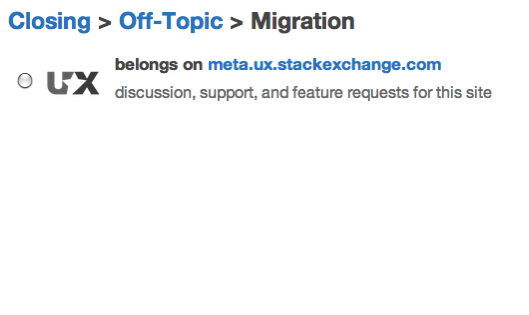 Yeah, just the one site.

I suggest the following be added:

Graphic design, yes, I'd agree with that being added there. Especially as we're now going to be migrating some of the better Icon Suggestion type questions over there.

English.se I don't really see a need for. We've only migrated two questions in the last 2 years to english (this one and this one) so that's not really something that is probably necessary. (And if a question is posted here that really does belong there then it can still be flagged for mod attention and recommended for migration that way).

As for the suggestion of adding Stack Overflow to the list; no, I really don't like that idea. We get far too many flags and comments on questions from people saying 'this belongs on SO' when it quite blatantly does not and would be closed/deleted in no time should it hit that site. That's a bad experience for those users, not to mention it annoys the SO community (and mods) no end! Again, if a question really does belong over there then us Mods can deal with that - such as speaking with the mods of SO to confirm. It's very rare that someone posts something here that is genuinely suited better to Stack Overflow. The opposite is far more common (something posted there that belongs here).

So I partially agree with you. Lets add GraphicDesign into the list, but not the other two as there's not really much call to do so.

It's not something us mods can add in directly though, we can get one of the Stack Exchange community managers to do it, provided we have a good case for doing it - which is what this post should prove. If we get a few more upvotes and no disagreements then I'll request we get GD added to the list.

I think that the conclusion regarding it was that it was a Beta site, so they couldn't/wouldn't "elevate" it to a full site status by including it in the official migration list. It's still in Beta, but maybe they'll reconsider. I'd be happy if this was done.

Not the answer you're looking for? Browse other questions tagged feature-request .

16
Vote to close options should include GD.SE and SO
10
Add Graphic Design to Migration list
7
Why is meta.ux.stackexchange.com the only choice for migration?
4
Adding GraphicDesign.SE to suggestions list when flagging a post as off-topic

16
Vote to close options should include GD.SE and SO
6
Should we allow Community Wiki-type lists posts on the main site
1
Why aren't duplicate questions automatically merged? Or at least linked both directions?
2
Flag a comment that you have upvoted
3
New feature that would allow the closing of a question via migration to any *.SE site through an automated close/moderator flag process
2
Have rules changed at ux.stackexchange?
0
Is having view all option in pagination good in terms of User experience?
2
Propose "close as off-topic" option that suggests to post a question on a different Stack Exchange website
0
Process for dealing with bounties that don't have an answer associated with it