Why does clicking the "StackExchange" logo in the top-left corner of this very page not directly take you to stackexchange.com?

Rather than taking you directly to the main page, it opens a popup containing another button that you need to click.

Why in the name of everything holy is this website designed this way?

Please tell me there's a good reason. It's driving me mad. 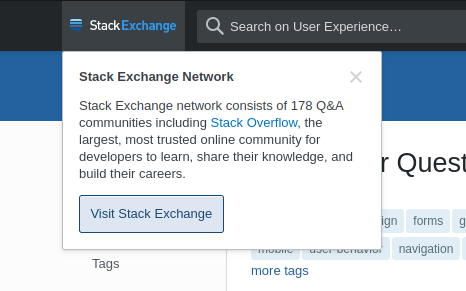 It makes sense in the context of the design that preceded it, which had the logo open the site switcher: 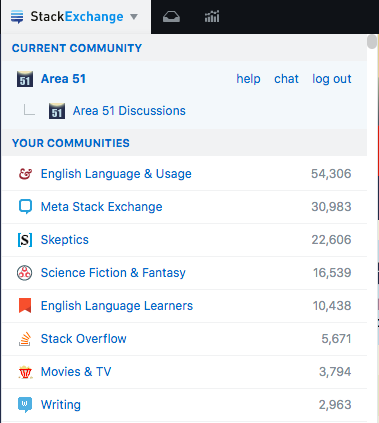 (It still works this way on Area 51, the neglected mess of code that it is.)

For years — forever, as far as I know — users learned that clicking on "Stack Exchange" on the left opens the site switcher. It was muscle memory.

When the site switcher moved to the right of the screen, the "Stack Exchange" logo was left where it was but just did nothing. This didn't make sense. Neither did opening stackexchange.com in a new tab (the next iteration), which was only slightly better than having it be in the same window for those who still were expecting the site switcher. Eventually, the choice was made to have it be a dropdown, a compromise in essence between having it do nothing and having it do too much.

Why did the site switcher have to be moved? Presumably so it could be put next to the help dropdown, like near like. A lot of other interface elements were moved at this point. There's a blog post about the whole redesign: How Stack Overflow Redesigned the Top Navigation

Not the answer you're looking for? Browse other questions tagged discussion navigation .

9
Rebranding UI to UX + UX Exchange
4
Blacklisted tags - present and future
4
What's the best way to use official UX style guides in answers?
23
The multiple question lists on Stack Exchange sites - a working concept?
11
Should we get rid of the user-experience tag?
1
Clicking on Logo and Clicking on Questions does different things but the screen looks the same?
17
Are these quasi-UX 'why is this thing the way it is' questions appropriate for the site?
5
2018 Moderator Election Q&A - Questionnaire