Every time I go to share a question I forget there are twitter and facebook links and do it manually. This is because the links are written in plain text beneath the entire thread rather than using the well-known "tweet" and "recommend" buttons that each network provides, and placing them in the area I'm likely to expect them (by the question). 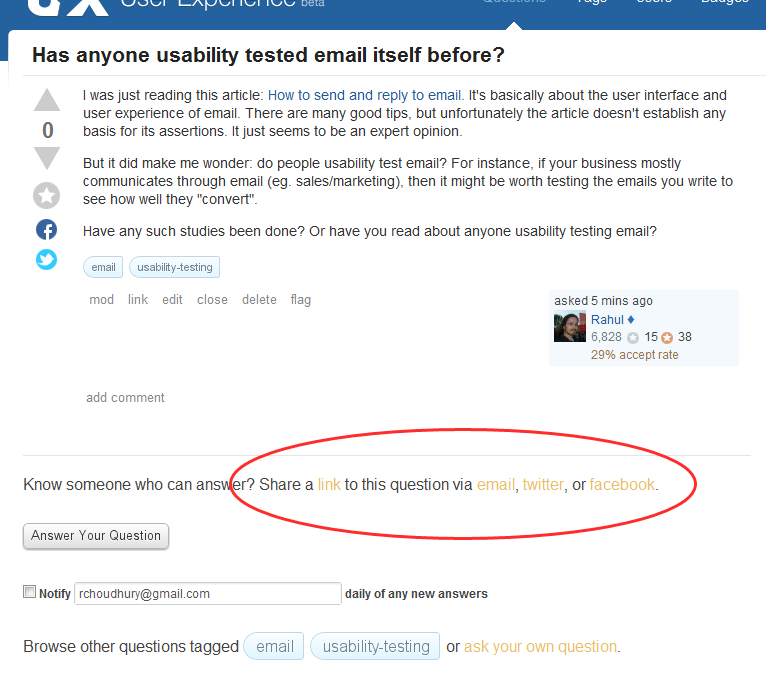 The icons beneath the favorite button to the left don't seem to work on me because:

We can improve on this with the following changes: 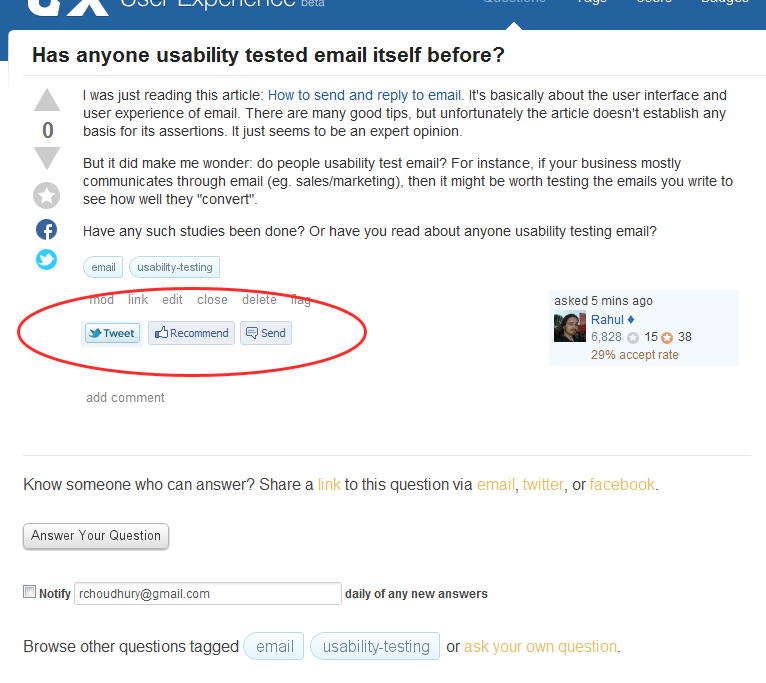 It would be worth A/B testing to see whether a new, prominent position using official buttons has a higher sharing conversion than the current customised ones.

PS. From a UX standpoint this is a bug but I'll tag it as feature-request for convenience's sake ;)

It looks like part of this suggestion was implemented; there are now more obvious calls to actio beneath questions for posting to Facebook, Twitter and LinkedIn, although they're still "styled" and not default widgets.

So apparently I'm blind and they're right there on the left. However, now I'm curious whether other people miss them as well, since I looked for them, print screened a screenshot of the page, edited it in Photoshop, uploaded it into my question and still didn't notice them.

Is the affordance of the standard buttons so great that I'm blind to any adaptations?

The sharing options only seem to display (in text) when there are no answers to a question. However surely people sometimes want to share their answers? Or am I missing something.

I tend to agree with Rahul that using the well understood icons would help.

Not the answer you're looking for? Browse other questions tagged feature-request sharing .

Welcome!
This site is for discussion about User Experience Stack Exchange. You must have an account there to participate.
Help
Visit chat

5
Can we add targeted cross-stackexchange promotions?
1
Can we add email notifications of new posts?
6
Social sharing buttons missing?
4
Update FAQ to state that tool recommendation questions are out of scope
5
How to encourage questions
7
Badges for answering X and asking Y number of questions
2
Have rules changed at ux.stackexchange?