I think Mockups would be a great part of the first user experience and not allowing new users to post them must be frustrating. Unlike images it's hard for a spam user to make anything spammy or offensive with Balsamiq's tools.

Could we get an exception for Mockups somehow?

Unlike images it's hard for a spam user to make anything spammy or offensive with Balsamiq's tools.

Since the rendering of the images happens client-side by the Flash editor, a technologically able user will not have a problem uploading any image via that route.

In addition to that: As soon as we remove the restriction, UX.se is "that site on the internet where you can use Balsamiq for free, with no nag screens".

Lastly, you of course know that what's of the foremost importance in a question is the text. Posts with Mockups already tend to contain less descriptive text. Since a good question should never depend on an image – not exclusively but at least in part for searchability reasons – it's a risk to open us up to questions that essentially look like the very first test question I created when developing this feature: 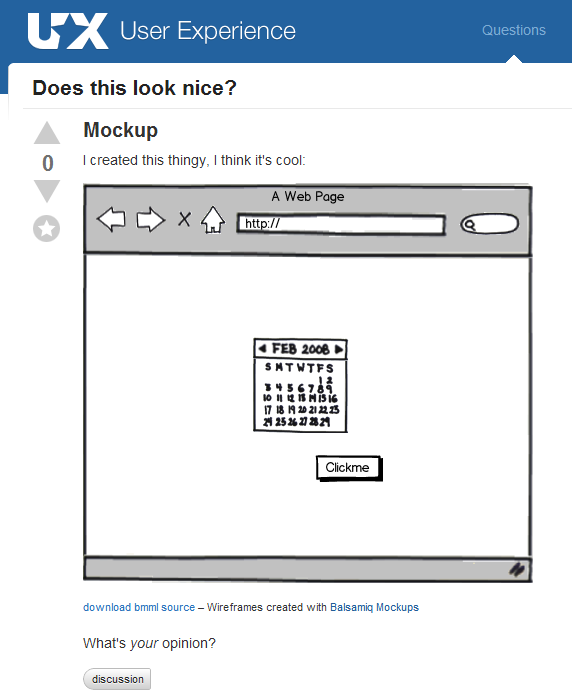 – tongue only partially in cheek.

The threshold for using the balsamiq editor already is extremely low, but there has to be some restriction.

Not the answer you're looking for? Browse other questions tagged feature-request status-declined mockups .

1
Can we add email notifications of new posts?
58
Can StackExchange license Balsamiq for mockups on UX.Stackexchange?
0
Balsamiq Mockups isn't working
20
How do I add mockups and/or visuals to my questions?
3
New feature that would allow the closing of a question via migration to any *.SE site through an automated close/moderator flag process
3
Balsamiq Mockups Wireframes icon is missing
0
Placement of the "Post your answer" field