Will there come a point when all possible questions have been asked?

I've been wondering whether new users of the site might get a little disenchanted when they find that, whatever question they ask, some old hand pops up with a link to a previous question and says 'we've already had that'. And then closes their new question.

Is this likely to become a problem ?

Just as information for readers, here's a graph of closure rates (percentage of questions) per month up until Mar 2012. Clearly there is an upward trend for closures generally. 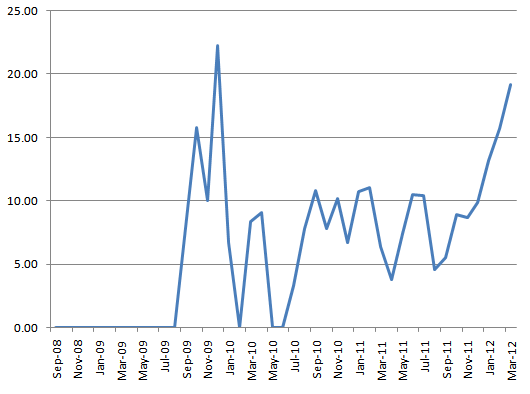 There are, at this exact moment in time, a finite number of user experience problems. It is an extremely large number of problems and could probably keep this site going on for the rest of our lifetimes, all technology, software and people remaining the same.

But that's not how it works. We end up with new technologies, new interaction patterns and even new conventions, social expectations and laws. There's new psychological and market research to base decisions on, new findings to critically evaluate and test.

If this site was shifted back in time 6 years do you think we would have 200 mobile questions? No, because mobile was almost a fevered dream, cell phones were awkward dumb devices and Blackberries and PDAs were only used by the tech elite or savvy businessmen. Now we're on the road to Smartphones being more popular than just "phones". There wasn't responsive-design or android or ios, and a tablet was just a Wacom; only viable for the design industry, not normal users. In 6 years the world of tech has shifted more than other industries have in decades, and with that comes more UX challenges.

Yes, we've covered many of the big issues in current UX. Yes, we had that discussion on the Floppy disc icon. Yes, we talked about progress bars animating "backwards". But there's still a lot of ground to explore and much of that ground to cover doesn't exist yet.